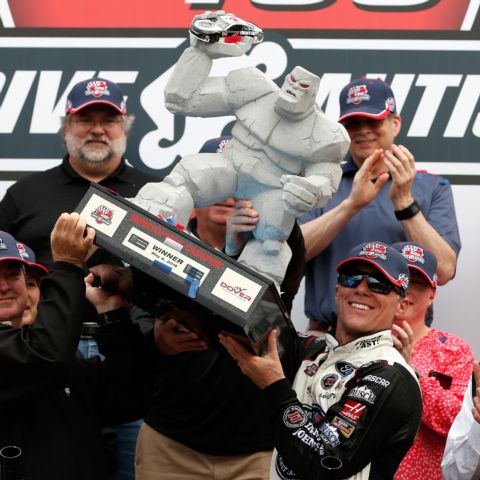 Kevin Harvick, a three-time Dover Motor Speedway champion, announced this week that 2023 will be his last full-time season in the NASCAR Cup Series.

The driver of the No. 4 Ford for Stewart-Haas Racing won the 2014 NASCAR Cup Series championship and has 60 Cup Series victories in 779 career starts.

“With championships across several NASCAR series and a NASCAR Cup Series win total that ranks in the top 10, Kevin Harvick’s legacy as one of the all-time great drivers is secure," said NASCAR President Steve Phelps.

"Beyond his success inside a race car, Kevin is a leader who truly cares about the health and the future of our sport – a passion that will continue long after his driving days are complete. On behalf of the France Family and all of NASCAR, I congratulate Kevin on a remarkable career and wish him the best of luck in his final season.”

"Dover is a unique animal of its own, just because of the fact that it has those elevation changes and it has a lot of speed," Harvick said in advance of last year's DuraMAX Drydene 400 presented by RelaDyne NASCAR Cup Series race.

"It's a physically demanding race track and it's a race track where you definitely get the biggest sensation of speed of anywhere we go because of the way it compresses you down into the banking and tosses you up out of it."

Harvick, who also won NASCAR Xfinity Series championships in 2001 and 2006, is one of only 18 drivers to have won three or more Cup Series races at Dover.

NASCAR's best drivers return to Dover Motor Speedway on Sunday, April 30, 2023. This will be the 105th NASCAR Cup Series race hosted by the Monster Mile.